We have submitted a paper on the work of multi-robot collision avoidance to the International Conference on Robotics and Automation, titled the 'Extended Velocity Obstacle', based on ORCA. We were accepted and presented our work!
Presenting our EVO algorithm at IRCA 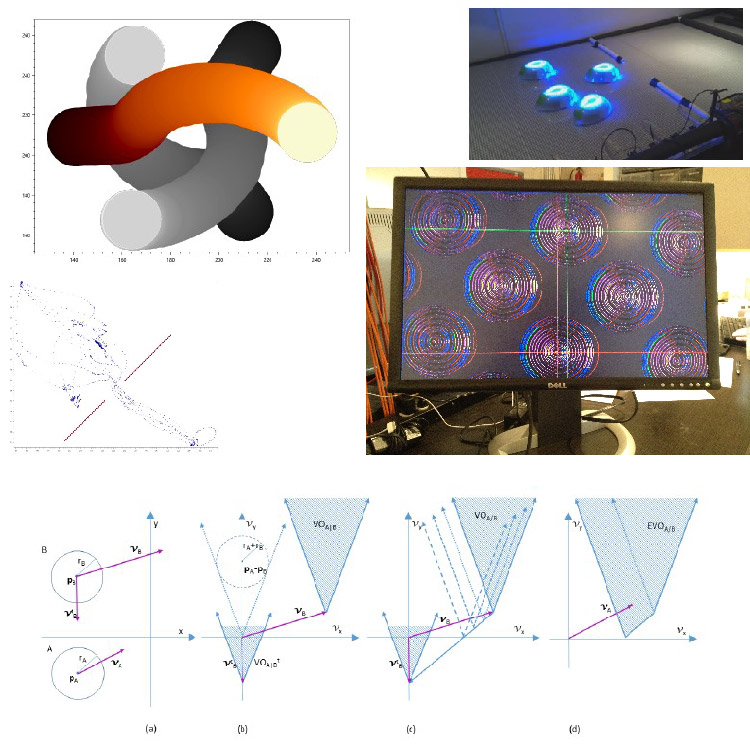 We have submitted a paper on the work of multi-robot collision avoidance to the International Conference on Robotics and Automation, and we've been accepted for publication in the Proceedings of 2015 IEEE IRCA!  We'll post the final version of the paper once it is submitted, but the gist is that we developed an enhancement to the ORCA algorithm which helps robots collaboratively figure out how to not run into each other, particularly when they are trying to cross paths or maneuver in tight areas near walls.

The video below shows the robots trying to swap positions and drive to the point opposite them on the circle.  This obviously has the potential for a traffic jam because the shortest path for every robot is straight through the middle of the circle.  Both ORCA and our enhanced algorithm (called EVO, or Extended Velocity Obstacle) solve the problem so the robots don't ever run into each other, but EVO gets them there faster and in a path that looks more natural.  In the paper, we quantify this with lots of trials, but in the video you can see that the robots don't ever have to turn around and seem to gracefully get where they want to go.  This contributes to making the robots seem more intelligent and more life-like.

After our paper describing a new collision avoidance scheme got accepted at the beginning of the year, we got the opportunity to introduce it in person at ICRA 2015 in Seattle. It was a lighting round with only 3 minutes to introduce some concepts that took a long time to develop, but the audience was ready for it.

If you are really interested, you can read the full paper here. What was particularly cool was to meet the authors of much of the work that our new algorithm was built on.