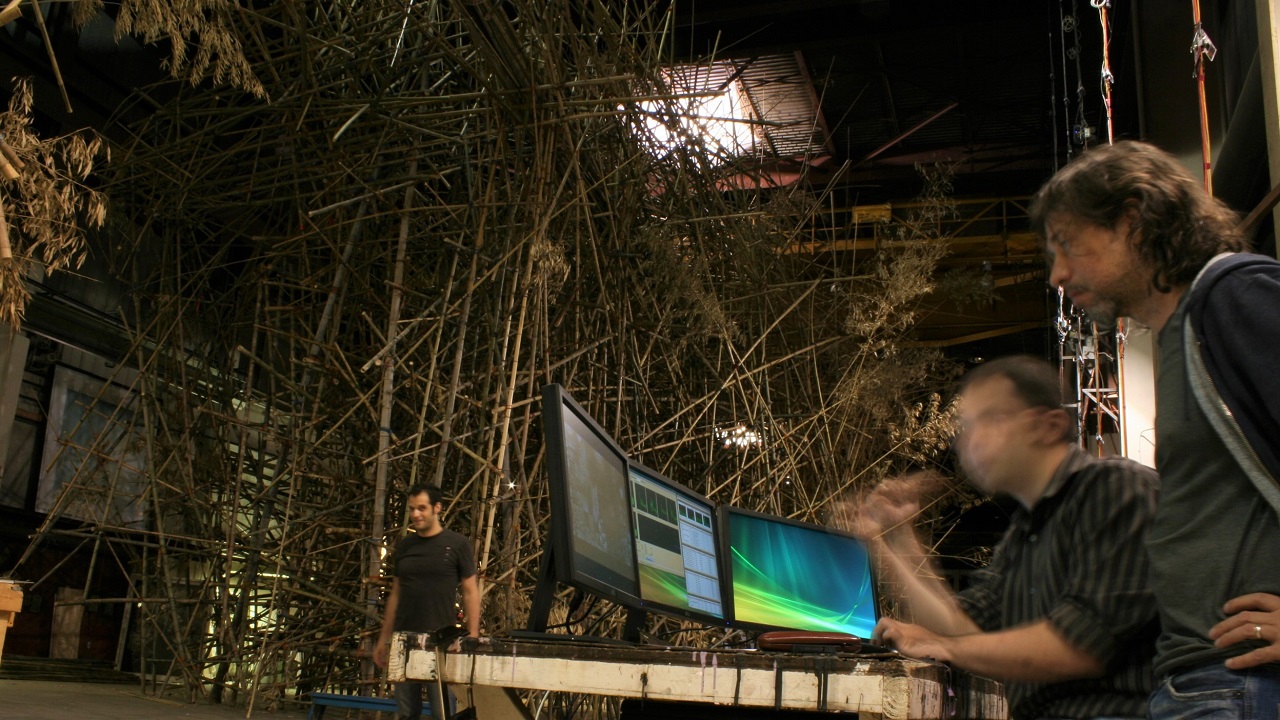 In the summer of 2009, acclaimed American artists, Doug and Mike Starn of Starn Studio asked Three Byte Intermedia to develop a video capture system to document the construction and evolution of their warehouse-sized sculpture entitled Big Bambu.  The artwork consists of more than 2,000 poles of bamboo which are assembled by rock climbers under the direction of the Starn brothers.   The piece is fascinating both for its statement as a static shape of impressive proportion, but also for the ongoing process by which it evolves over time.

The location of the project precludes the possibility of capturing a single image of the entire sculpture evolving from any one vantage point.  The Starns had designed an array of 119 cameras (the cameras are grouped into 17 columns, each of which contains 7 cameras) with the ambitious idea of capturing and stitching together into a single composite image. They contacted many video and software developers and had many dead ends until they contacted Three Byte.

Three Byte took the Starns’ design and added a capture computer to each of the 17 columns. Each of these computers captures images from its 7 cameras and assembles the frames into a single tall column of video. These computers also manage the slight offset and stretching of the camera images to facilitate the alignment of adjacent cameras.  A master computer collects the imagery from the 17 columns and constructs a single high-resolution composite image of the entire sculpture. Imagery is captured and composited in half-second bursts once per minute.

As rock-climbers work through the day, the master computer shows them moving in and out of individual camera frames as they traverse the structure and the massive composite video frame. Throughout the day, images are automatically uploaded to the Starn Studio website so that the most recent progress is always visible to the public, and they are written to the hard drive which will result in a time lapse of the entire piece as it walks down the 300’ long studio space.

Three Byte Intermedia wrote custom software that captures, composites, sends the video images over the network, and renders to a 5760x1080 surface, consisting of 3 HD monitors.

Each vertical column of cameras can be taken down from one end of the grid, moved to the other end and plugged back in with a minimal amount of reconfiguration.  The central display system deals with arranging the columns the correct order in the frame.  Cropping, alignment, and configuration controls for each camera are all available through the centralized master computer.

Even with a Gigabit Ethernet infrastructure, the network had to be design specifically to accommodate large bursts of image data, utilizing 4 subnets and 4 network adapters on the main computer to prevent transmission delays.

As bamboo is removed from one end and added to the other over the lifetime of the sculpture, the sculpture moves throughout the space in which it is housed. The Starns designed the camera grid system to move with it and ThreeByte configured the array to work as plug-n-play.