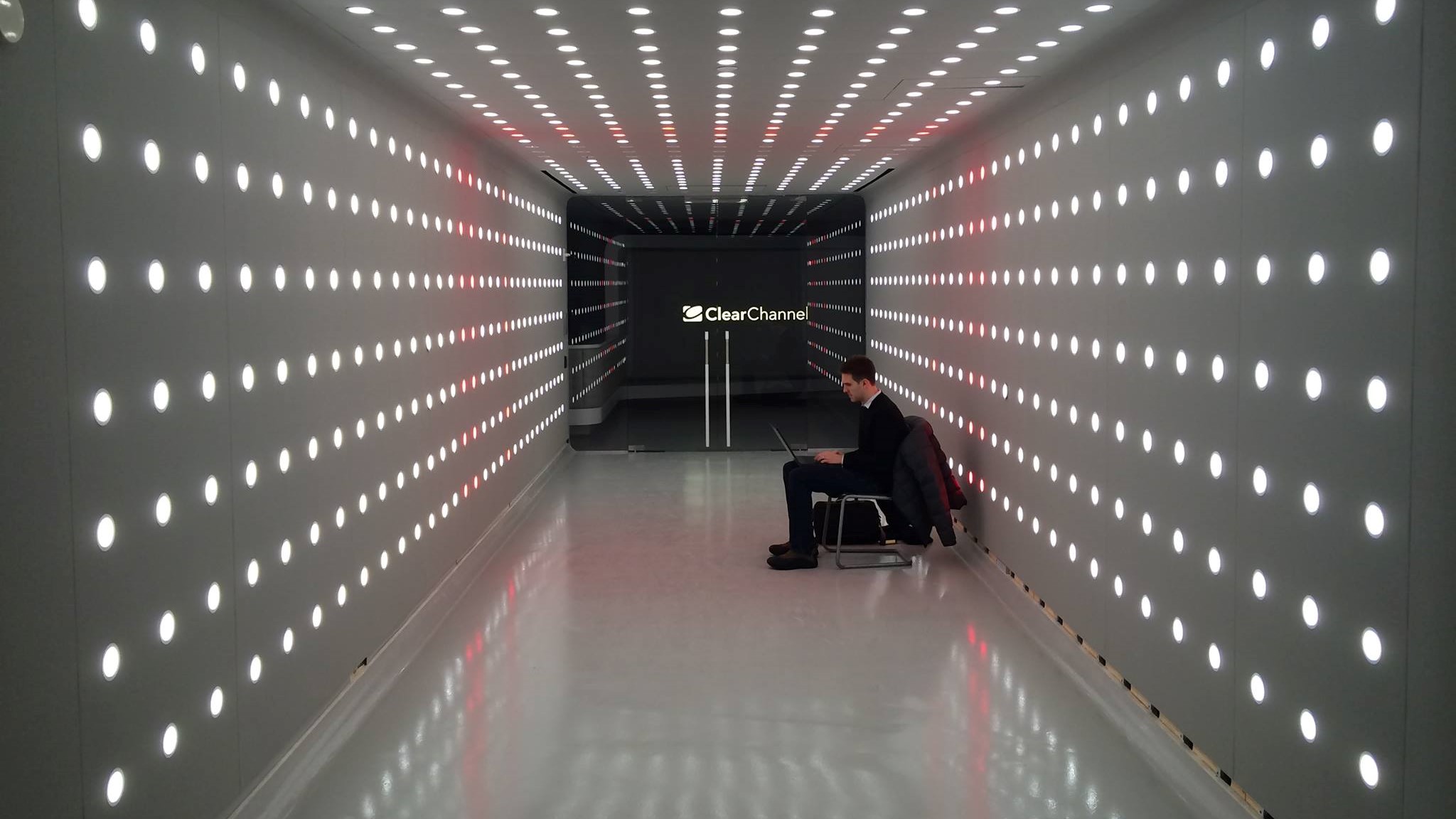 Recently we collaborated with AV consultants Controlled Entropy and designer Beneville Studios to create a unique Tuning Chamber & 'out of this world' conference room they called the 'presentation portal' in the New York City lobby of mass media giant Clear Channel/iHeartMedia. The corridor leads visitors from the elevator through a fog screen with video display and down a hallway lined with interactive LED lights and the sound of live streamed radio programming triggered by the visitors’ movements. Visitor's are then led to the conference room to be further wowed.

Clear Channel was renovating three floors in their New York offices and had been inspired by an interactive museum installation they saw to redo their lobby. Since they’re a media company best known for their radio stations, the idea was to have visitors become a human tuning dial controlling Clear Channel radio programming as they approached the reception desk.

Three Byte was tasked with writing custom control software to orchestrate every element of the interactive experience: the microwave sensors which pick up new arrivals coming out of the elevators, DMX control of the fog screen welcome video featuring Clear Channel radio DJs, 2,000-channels of DMX control for the red-and-white LEDs dot-patterned in the walls, and the play out of live streamed radio shows on a dozen Clear Channel stations mixed with radio static effects.  If a visitor hears a song or DJ they like they can pause and listen before their progress down the hallway triggers radio static and changes the station.

Three Byte’s custom software is a C# app with a backing SQL database. By running control for all of the Tuning Chamber’s elements out of one custom application Three Byte eliminated the need for racks of AV equipment dedicated to the fog screen and its video display, the LED lighting and the live streamed audio mixed with radio static effects.

The control solution is also a “set it and forget it” app that is easily operated by Clear Channel personnel. They have web-based control of the elements and can do basic overrides.

Visitors to Clear Channel love the one-of-a-kind interactive experience that awaits them as soon as they step off the elevator.  Musicians, in particular, are having a lot of fun with it.  They’re doing moon walks and dancing back and forth through the space to get the most from the live streamed audio.

We had alot of fun with the wireframes for the Presentation Portal UI- Who ever used Lasers, Fog Machines, and a Robot in a conference room?

Before the Tuning Chamber was installed a full-scale mockup was built at Beneville Studios to simulate the space and allow the participants to make their hardware and software decisions.

Creating the mock up was extremely important, being able to come together with the design team and the client and walk through the experience making changes to the interactivity when necessary was essential to getting the installation off to a fast start.  When the Tuning Chamber was installed it was up and running immediately so Clear Channel could impress clients right away.