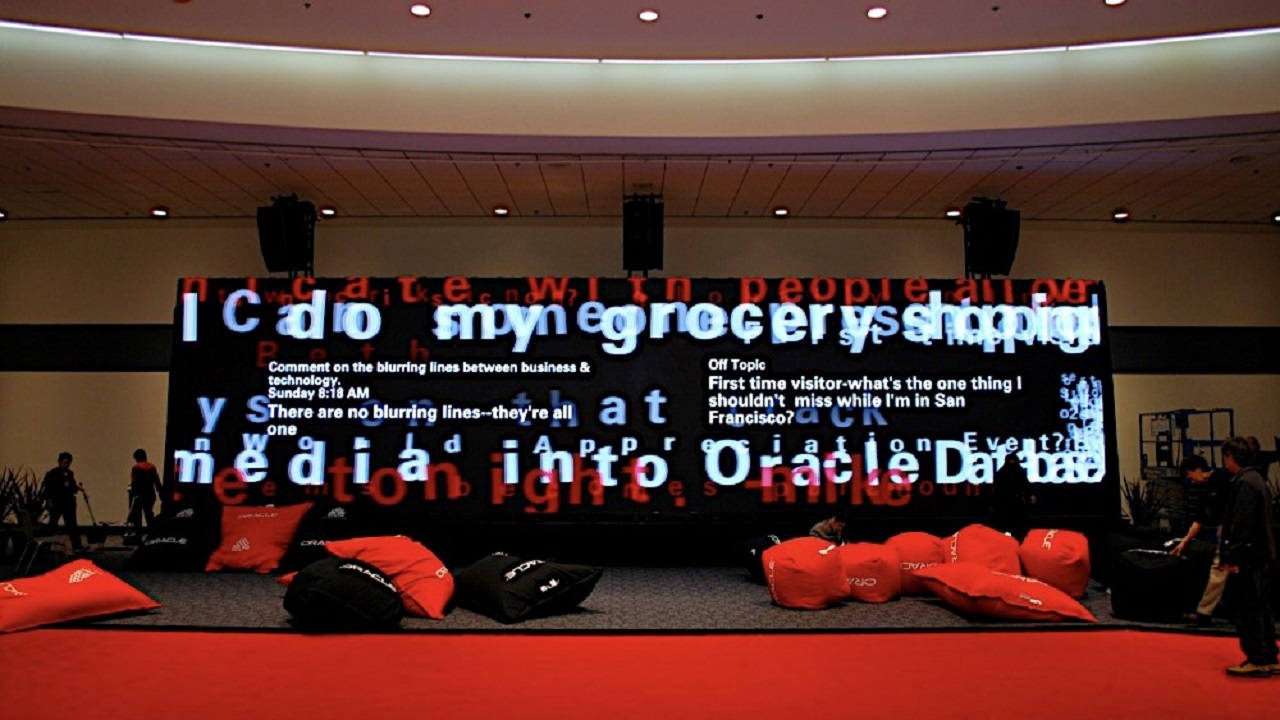 Designed exclusively for the Oracle OpenWorld 2008 Conference in San Francisco, the Conversation installation sought to engage convention participants in an exchange of ideas through large-scale video art. Three Byte Intermedia was asked to implement the look for a dynamic new video component. Three Byte provided a text rendering engine that displays continuous streams of visitor comments, evoking a river of ideas. Out of this river, some comments are momentarily brought into focus in their entirety before drifting back into the mix. Convention participants were encouraged to enter new comments at dedicated kiosks and then look up at a local Conversations display to see the comment immediately brought into focus. The result was a compelling combination of dynamic visualization and real-time, user-generated content.

The video and text rendering control system was implemented with Medialon Manager show control software which allowed on-the-fly customization of the look of each display surface and real-time control of playlists containing pre-rendered video content.

The text rendering application was deployed on 20 distributed systems throughout the conference, including LCD displays paired with input kiosks, 200' wide theatrical projections during the keynote address, and 3 specially-designed LED systems in and around the conference site. On the larger LED Conversation displays, the Conversation text alternated periodically with branded video content.

The playback/render system consists of 9 HP workstations, each driving 4 displays with a pair of NVidia Quadro 4800 graphics cards. Three Byte wrote a custom video application that decodes 8 simultaneous 1080p 30fps mpeg-2 files per workstation and renders 74 mega-pixels 30 times per second to the monitor array. The system supports full native-resolution content. The computers are kept in sync via a network synchronization protocol, also developed for this project. The synchronization mechanism allows for frame-accurate looping and seamless frame-to-frame transitions between videos.

A video camera over the vestibule near the entrance detects a person entering the space. Upon entering, a visitor is greeted by a brief transparent video overlay welcoming them to the space, displayed on top of the regular video content. The motion detection application is intelligent so it will trigger the greeting when a visitor arrives but not when he departs.

Tying all the components together is a Control System, and Content Management System (CMS). The CMS allows a user to stretch and position videos on the wall, specify transparent overlay and underlay images, and build synchronous playlists for multiple videos running on different parts of the wall.

The six right-most columns of monitors are positioned at a distance from the other 12, so the entire video wall, including all mullions and other spacing between screens, has a virtual canvas size of 32,498 x 3,972 pixels, while the actual resolution of the monitors is 19,440 x 3,840. The CMS includes tools for importing content up to this size for overlay, underlay, and native-resolution video frame sequences, all of which are automatically sliced into 1920 x 1080 HD pieces appropriate for the individual displays. The CMS automatically handles all mullion management, ensuring that content always remains spatially consistent as it spans multiple displays.